In a fixture that looks like men against boys,the in form liverpool team stole the victory through Jones 25 yards curler which proved enough to put them through the next round of the English FA cup.

Cristiano Ronaldo becomes the first football billionaire in the World 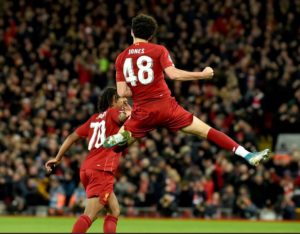 Takumi Mnamino was handed his first liverpool game as he debuted alongside the likes of Nathaniel Phillips and Yasser Larouci.

Carlo Ancelotti,with four games as a manager at Everton,2 wins and 2 losses,the Toffees boss is heavily criticised his team over a lacklustre performance as they succumbeed to a 1-0 defeat to a youthful liverpool team who trashed them over their numerous mistakes and missed opportunities

The manager who  hinted that he was onced offered the liverpool job has criticized his team performance,in his words

Andrian  Miguel was outstanding in goal for Liverpool as his superb performance was enough to deny Richarlison, Carlvert_Levin and others from scoring.

This win means Liverpool has beaten Everton twice in the same season,the first time since the 1986-87 campaign and make Liverpool unbeaten in their last 23 home encounters.

The Reds prepare to face Tottenham on Saturday while Everton will battle Brigthon.

Cristiano Ronaldo becomes the first football billionaire in the World

The forward-left winger of Juventus, Cristiano Ronaldo will make the third number of sportsmen to have earned 1 billion dollars...

After impressing in the green and white colours of the Super Eagles during the international break, winning both AFCON qualifiers...

The League Management Company (LMC), organizers of the Nigeria Professional Football League (NPFL), has imposed sanctions on the Nasarawa United...

Coach Gernot Rohr threatens to quit the Super Eagles if…

Super Eagles coach Gernot Rohr has threatened to quit the Super Eagles, issuing a two-month ultimatum to the Nigeria Football...

Brazil emerges champions of the U-17 World Cup.

Brazil emerged winners of the 2019 U-17 World Cup after a strong show throughout the tournament, winning all 7 matches...

Police curb attempt by robbers to attack CBN in Benin