Nigerians are protesting the anti-social media and anti-hate speech bills.

The main entrance into the National Assembly was, on Wednesday, November 27, 2019, overtaken by some Nigerians who were protesting the anti-social media and anti-hate speech bills.

Despite explanations by lawmakers who sponsor the bills, Nigerians have continued to express concerns that both legislations, if passed into law, may stifle the media and also become a tool to silence opposing voices.

The protest tagged #SayNoToHateSpeechBill is currently taking place at the National Assembly gate. 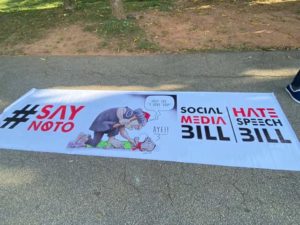 Carrying placards and chanting protest songs, they urged the Senate to drop both bills which they described as anti-people and anti-democratic.

“Do not gag me,” “It is slavery not to speak one’s mind,” read some inscriptions on their placards.

During the protest, a policeman, Adiogu Eyinnaya, seized the camera of a journalist who came to cover the protest.

Enyinnaya allegedly assaulted the journalist, Tosin Busayo, asking him why he was filming a policeman who asked a procession of protesters to go back.

Eyinnaya, who cut the frame of the most senior of the police officers, whipped the journalist’s hand with his baton, and yanked the camera off Mr. Busayo’s grip, before seizing it.

As he gripped it, he tried breaking the flex but the journalist prevented him from doing so.

“Why would you be filming the policemen?” he asked, threatening to take him to the security post.
While some of the journalists pleaded with the Policeman, others challenged him.

Enyinnaya eventually released the camera.
The protesters are also demanding the release of Omoyele Sowore, Abba Jalingo and others who are held against court orders.