Embattled Chairman and CEO of Air Peace, Allen Onyema is enmeshed in more trouble as the United States District Court of the Northern District of Georgia has issued a warrant of arrest against him.

The U.S. Marshals Service was authorized by the warrant signed by Magistrate of the court Justin Anand, to take Mr. Onyema into custody.

The extradition treaty between Nigeria and the United States which allows the extradition of suspects in both countries facing criminal charges might be invoked following the issuance of the warrant of arrest.

See the warrant of arrest as obtained by Premium Times; 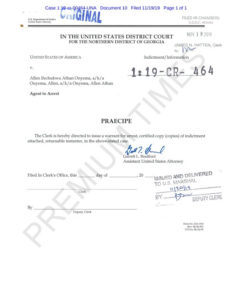 Recall that Business Influx reported earlier that the Chairman and CEO of Air Peace was indicted over an alleged bank fraud and money laundering scheme.

Allen Onyema was accused of moving more than $20 million from Nigeria through United States bank accounts in a scheme involving false documents based on the purchase of airplanes.

According to U.S. Attorney Pak, the indictment, and other information presented in court: “Onyema, a Nigerian citizen and businessman, is the founder and Chairman of several organizations that purport to promote peace across Nigeria, including the Foundation for Ethnic Harmony, International Center for Non-Violence and Peace Development, and All-Time Peace Media Communications Limited.

“Beginning in 2010, Onyema began traveling frequently to Atlanta, where he opened several personal and business bank accounts. Between 2010 and 2018, over $44.9 million was allegedly transferred into his Atlanta-based accounts from foreign sources.”

According to the statement, “in years following the founding of Air Peace, he traveled to the United States and purchased multiple airplanes for the airline.

However, over $3 million of the funds used to purchase the aircraft allegedly came from bank accounts for Foundation for Ethnic Harmony, International Center for Non-Violence and Peace Development, All-Time Peace Media Communications Limited, and Every Child Limited.

Beginning in approximately May 2016, Onyema, together with Eghagha, allegedly used a series of export letters of credit to causing banks to transfer more than $20 million into Atlanta-based bank accounts controlled by Onyema.

The letters of credit were purported to fund the purchase of five separate Boeing 737 passenger planes by Air Peace.

The letters were supported by documents such as purchase agreements, bills of sale, and appraisals proving that Air Peace was purchasing the aircraft from Springfield Aviation Company LLC, a business registered in Georgia.

“However, the supporting documents were fake — Springfield Aviation Company LLC, which is owned by Onyema and managed by a person with no connection to the aviation business, never owned the aircraft, and the company that allegedly drafted the appraisals did not exist.

“Eghagha allegedly participated in this scheme as well, directing the Springfield Aviation manager to sign and send false documents to banks and even using the manager’s identity to further the fraud.

After Onyema received the money in the United States, he allegedly laundered over $16 million of the proceeds of the fraud by transferring it to other accounts.”

An ex-governor of Oyo State, Abiola Ajimobi has been confirmed dead.     According to SaharaReporters, Ex-governor Ajimobi aged 70...